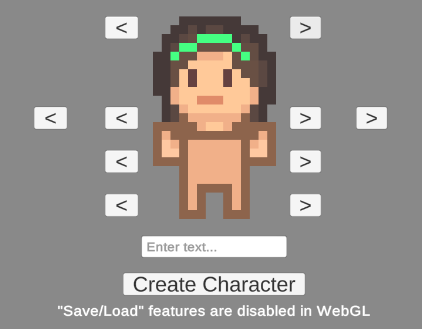 So I was looking at a twitch streamer which was designing her own 2D tiling system for a game. She said she wanted to make a character creation system which is also changable later on but she was unsure how she would do that. I then created this project to give her the source. It is complete with a save-load feature for desktop OS. This project took about 30 minutes.
Most time consuming thing was to convert pixelart to a format I could open in Photoshop.

The save-load feature is disabled in WebGL.

In short, this is a simple character creation scene with a few presets.
Art design is from: https://opengameart.org/content/customizable-character-pack